Many Cultures. One Humanity.

“The truth is – today more than ever – diversity is the reality that informs human life. Diversity means embracing pluralism in nations and cities, tribes and villages, in ethnicities and identities, in beliefs, faiths, and traditions.”

HIGH REPRESENTATIVE FOR THE UNITED NATIONS ALLIANCE OF CIVILIZATIONS

“In these troubled times, the Alliance is a unique and inclusive platform for Member States, the private sector, youth, civil society and the media to exchange views and commit to dialogue and new partnerships. It is closely aligned with my own priorities and the vision that I have outlined in my prevention agenda.”

While active on a number of cross-cutting issues, UNAOC works mainly in four priority areas to which it brings a multidisciplinary and multi-perspective approach: Youth, Education, Media, and Migration. The four pillars of UNAOC provide an essential organizing structure for the development and implementation of its various programmes and initiatives, which all play a critical role in reducing cross-cultural tensions and building bridges between communities globally. 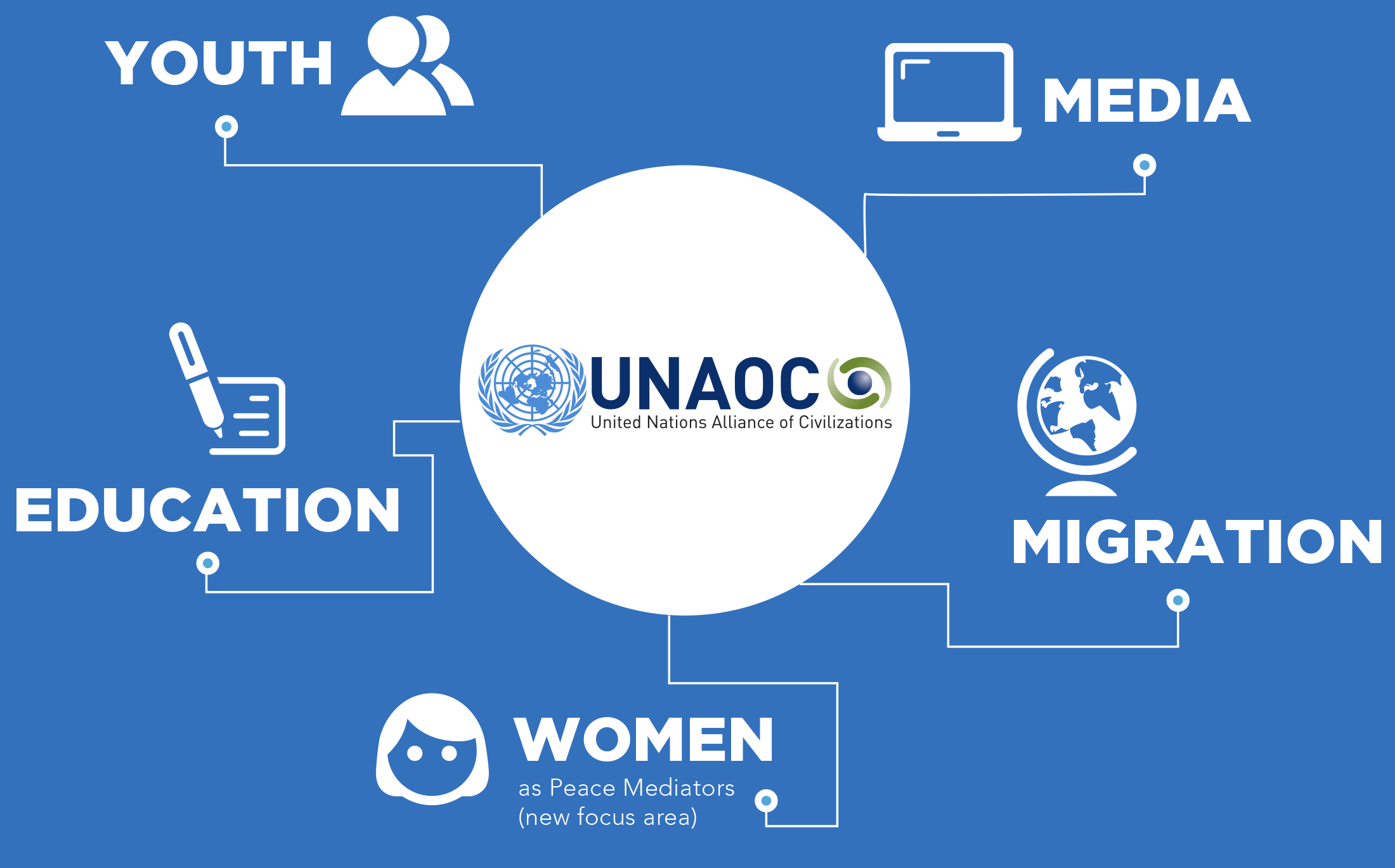 Advocacy and Areas of Focus

The High Representative for UNAOC delivers political interventions on a range of topics, including supporting attempts to increase the role of mediation efforts to promote the integration of migrants and refugees, as well as a broader space for dialogue for young women and men as a means of empowering youth in combatting radicalization and violent extremism. Other areas of priorities for the High Representative include:

Intercultural and interreligious dialogue and understanding

The role of women in peacebuilding

The main objectives of UNAOC’s programme activities are to facilitate the global conversation on the challenges and opportunities for living in a landscape of diversity in our age of global communication and exchanges; prevent intercultural tensions and crises; combat stereotypes, misperceptions, discrimination and xenophobia; and support innovative grassroots initiatives that contribute to intercultural dialogue and understanding, mutual respect and cooperation across divides.

Young leaders have benefitted from the Fellowship Programme

Young leaders are part of the exclusive Intercultural Leaders platform 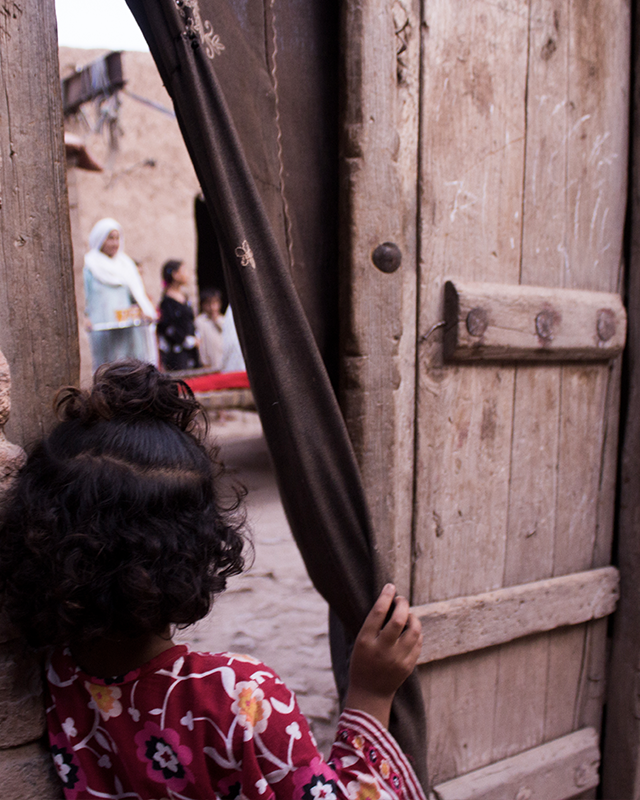 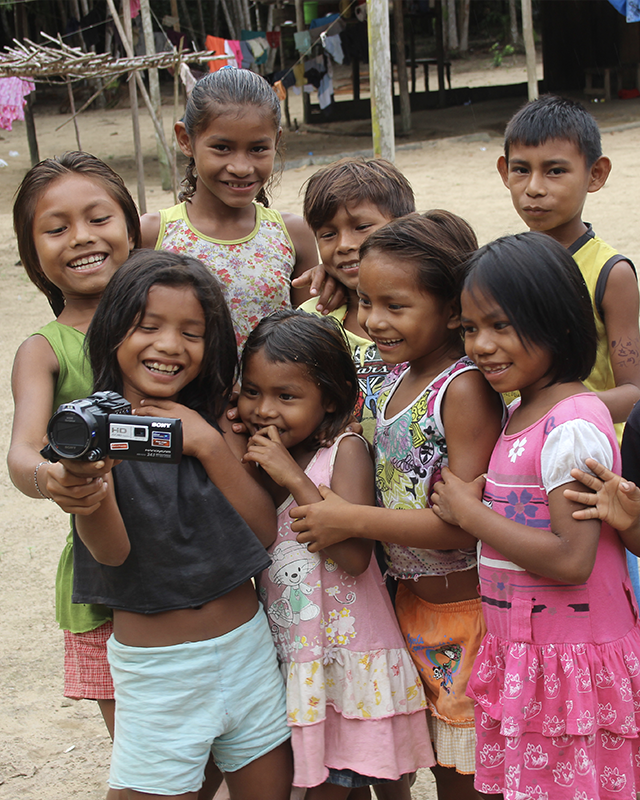 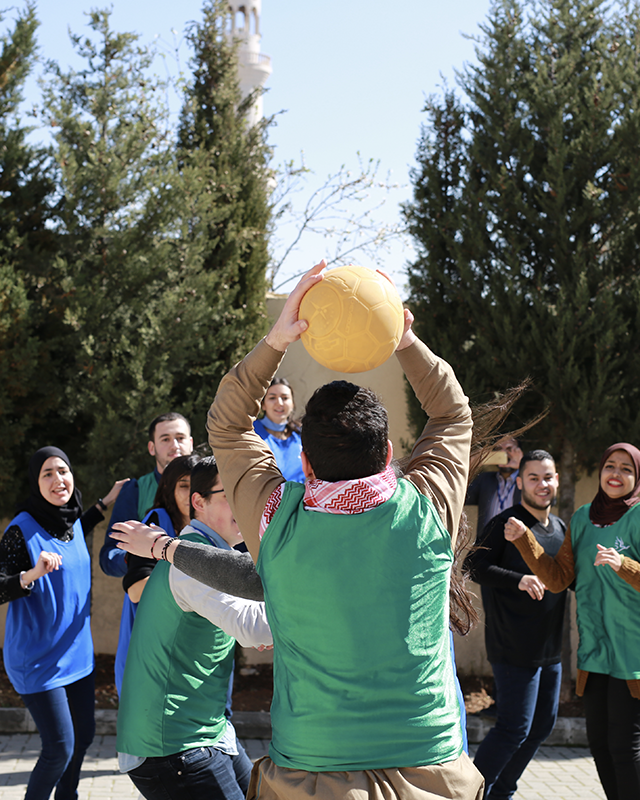 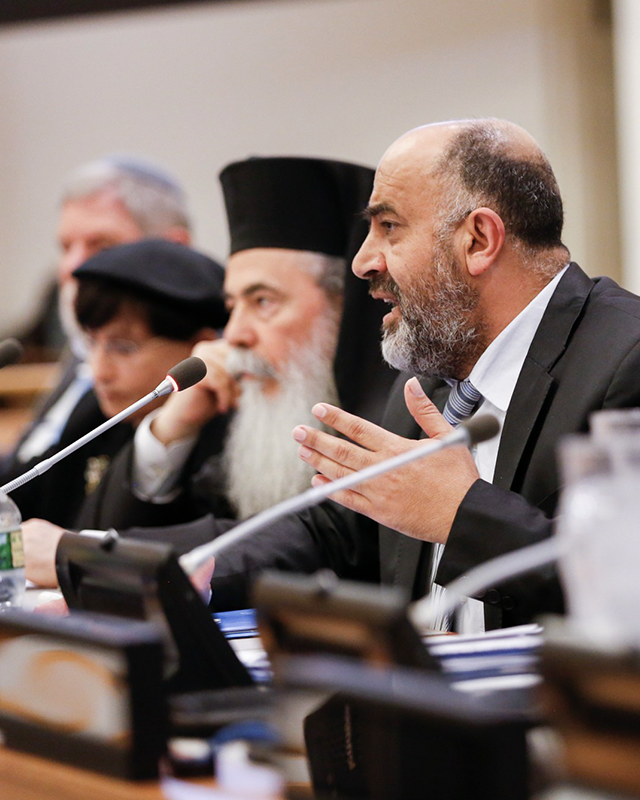 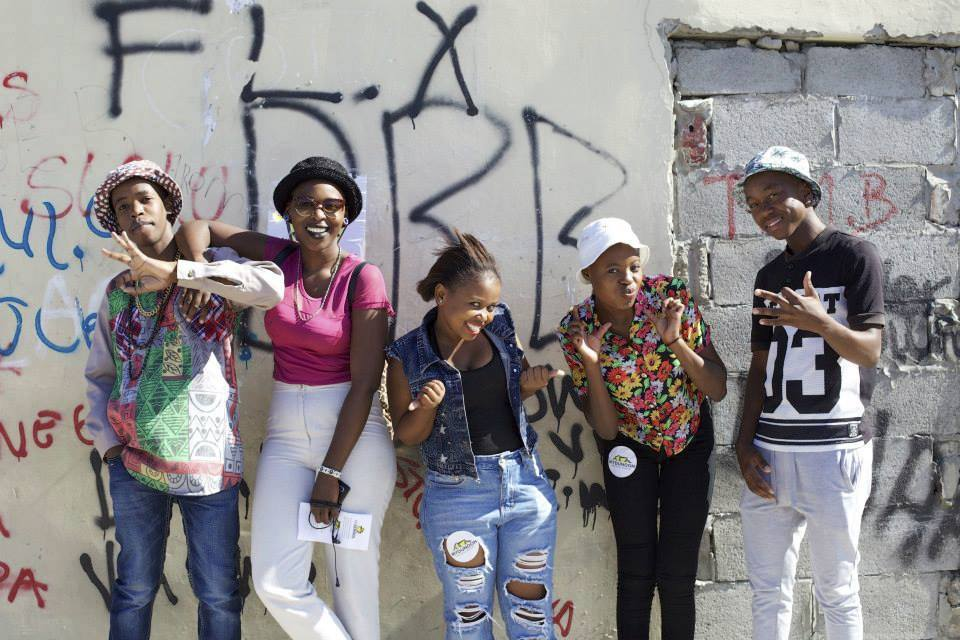 The Youth Solidarity Fund (YSF) provides seed funding to youth-led organizations that propose projects with innovative and effective approaches to intercultural and interfaith dialogue. The funded initiatives are youth-led and youth-focused but have an impact on entire communities. The Fund also links small scale and local work to larger movements for social and global change, to promote peacebuilding as well as to influence policymaking. In addition to the funding, UNAOC offers technical support and capacity- building to YSF recipient organizations and, when needed, assists with advocacy, financial management, media relations, networking, monitoring, evaluation, and sustainability. 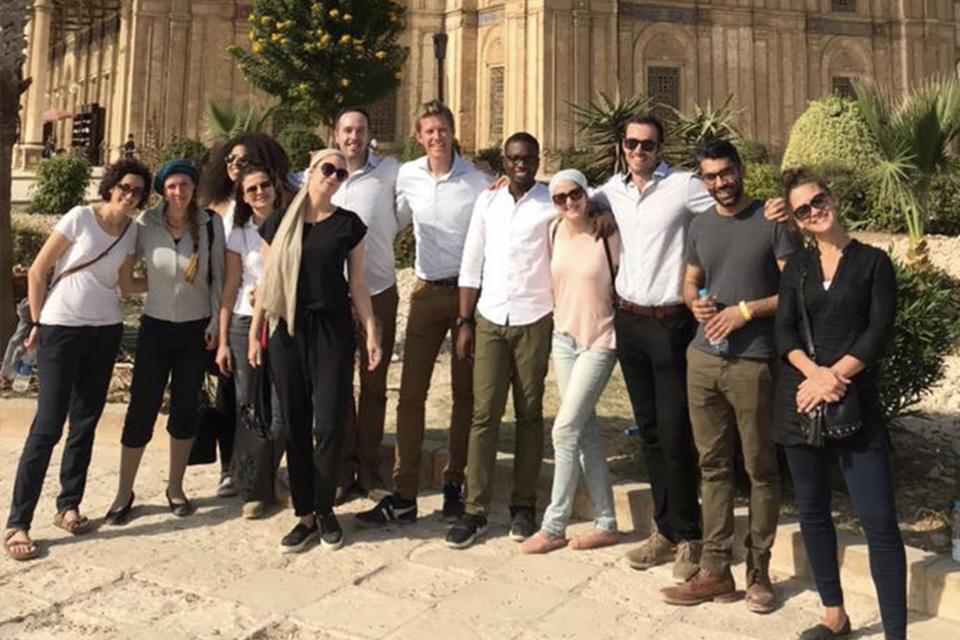 The Fellowship Programme promotes intercultural and interfaith understanding by engaging young civil society leaders from Europe, North America (EUNA), the Middle East and North Africa (MENA). Organized around two-week exchange trips between EUNA and MENA countries, the Fellowship Programme sends participants from each geographic area to their counterparts’ region. The initiative aims at challenging perceptions and deconstructing stereotypes. Throughout their journey, UNAOC Fellows interact with a wide range of local stakeholders. Together, they explore opportunities for intercultural collaboration and exchange ideas and good practices on how to address current global challenges. Each year, UNAOC chooses a different theme for the Fellowship programme that reflects the priorities of the United Nations Secretary-General. 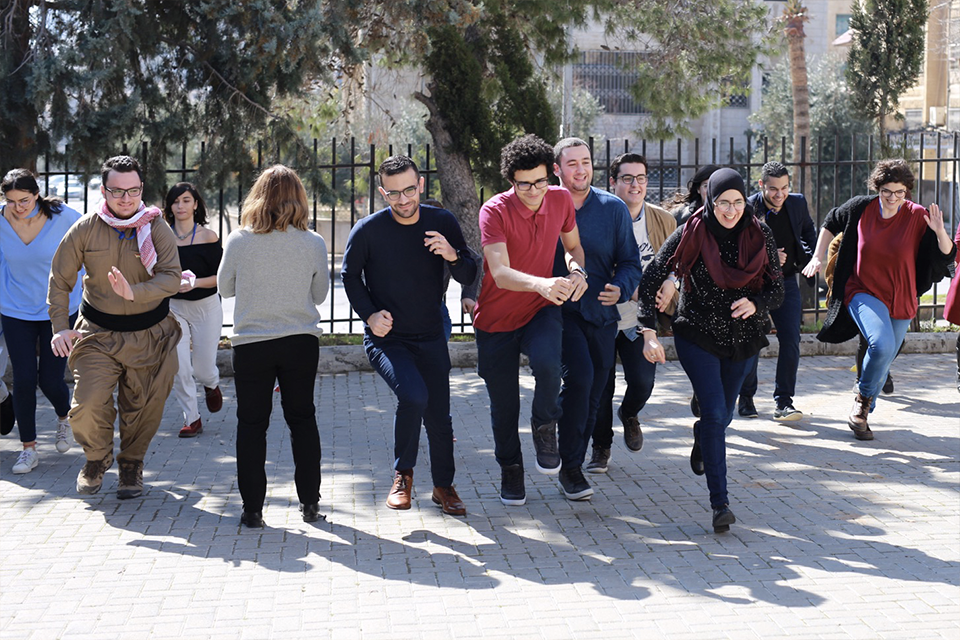 Young Peacebuilders is a peace education initiative that is designed to support young people in gaining skills that can enhance their positive role in issues of peace and security and in preventing violent conflict. It also brings visibility to actions initiated by young people towards peace and the promotion of diversity and dialogue. UNAOC intends to implement this programme in different regions of the world to grow and strengthen the global movement of young peacebuilders, with the goal of integrating them in governmental peace processes and policies. 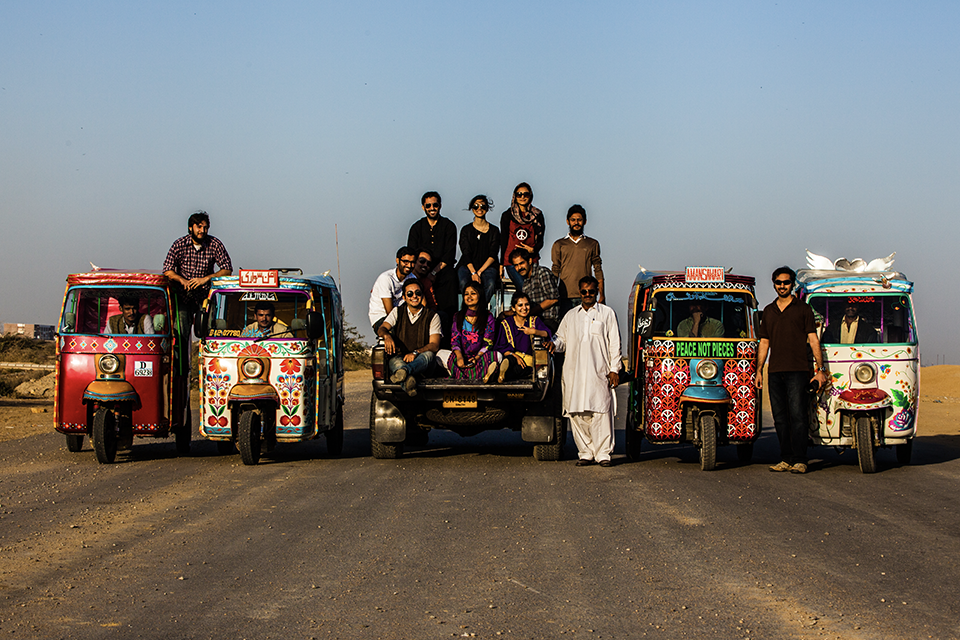 The Intercultural Innovation Award (IIA) is a global venture in partnership with BMW Group. IIA recognizes and supports the most innovative grassroots projects encouraging intercultural dialogue and cooperation around the world. Recipients receive a monetary grant and one year of mentoring support from UNAOC and BMW Group to help their projects expand and replicate. This model of collaboration between the United Nations system and the private sector creates a stronger impact, as both partners provide their respective expertise to ensure the sustainable growth of each project. 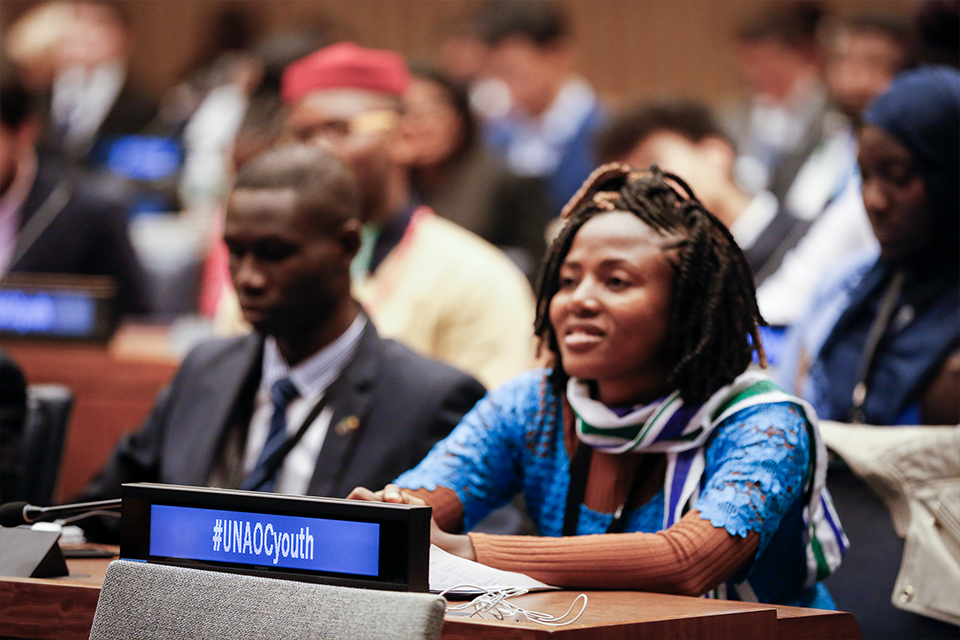 Recognizing the role of alumni in the implementation of its mandate and broader outreach, UNAOC created Intercultural Leaders in partnership with BMW Group, an exclusive skill and knowledge-sharing web platform, where over 600 alumni of UNAOC programmes and projects, professionals from partner organizations, and a group of mentors collaborate by exchanging knowledge, best practices, and expertise on addressing cross-cultural tensions. By providing this platform to facilitate networking and relationship building, UNAOC is able to assist its alumni in developing increased capacity to sustain their work. Promoting the values that underpin Intercultural Leaders also enhances UNAOC’s role as a convener, catalyst, and thought leader. 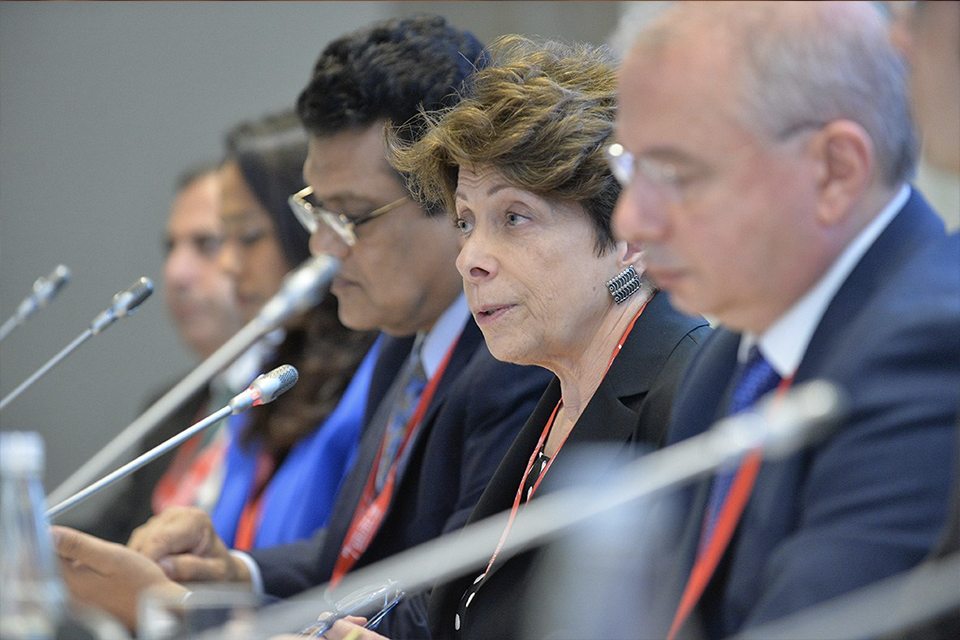 UNAOC’s #SpreadNoHate initiative aims at preventing and countering hate speech and the negative portrayal of migrants and refugees in traditional and new media. Since its launch in late 2015, the initiative has promoted constructive dialogue on hate speech among media professionals, academia, and relevant NGOs, and allowed them to share best practices in preventing and countering hate speech in the media. To date, UNAOC has organized five international #SpreadNoHate Symposia at the United Nations Headquarters in New York, as well as in Baku, Azerbaijan, in Brussels, Belgium, in partnership with the European Union, and Cairo, Egypt. The #SpreadNoHate initiative also consists of an ongoing social media campaign that has consistently topped Twitter trends and comprehensive reports with recommendations. 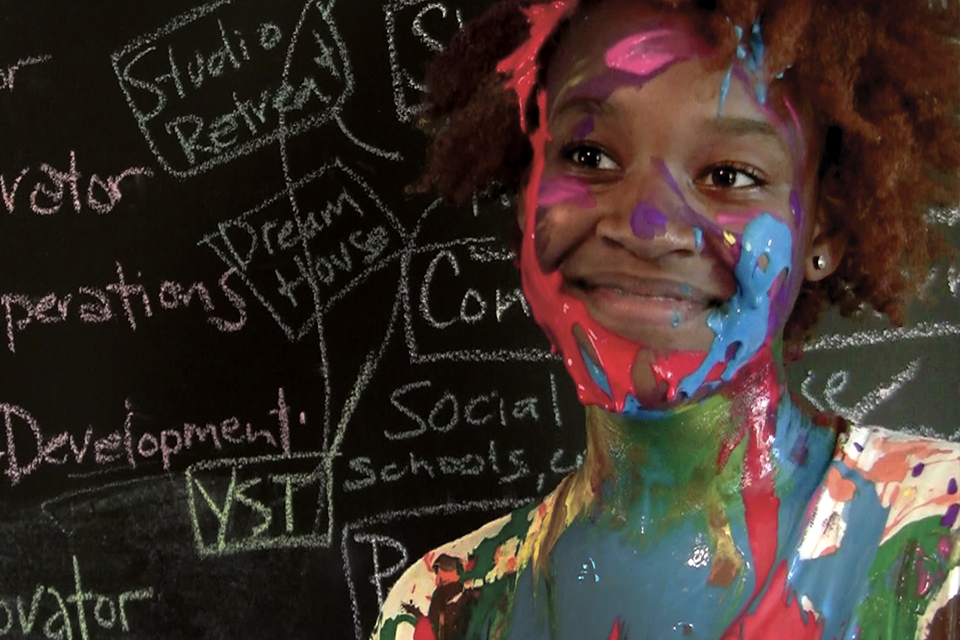 PLURAL+ Youth Video Festival is a joint initiative of UNAOC and the International Organization for Migration (IOM). The Festival invites the world’s youth to submit original and creative videos focusing on pressing social issues, including migration, diversity, social inclusion, and the prevention of xenophobia. By supporting the global distribution of youth-produced media, PLURAL+ recognizes youth as powerful agents of positive social change in a world often characterized by intolerance and cultural divisions. With increasing interest and participation each year since 2009, PLURAL+ has become a premier global platform for youth media distribution. 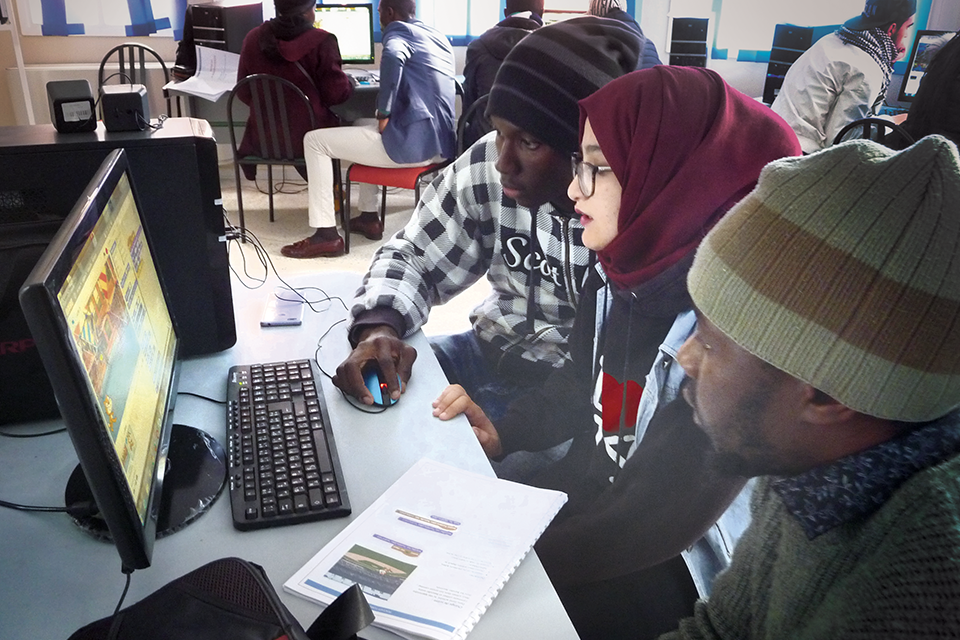 Initially designed with UNDP as a contest for digital games facilitating inter-cultural dialogue and violence prevention, PEACEapp developed into a series of hands-on workshops with young refugees focusing on the creation of video game apps for use on smart devices. PEACEapp creates a platform for mobile technologies to support creative forms of storytelling and digital narratives. The workshops and apps development also aim to connect young refugees to peers while building awareness about their situation and aspirations. 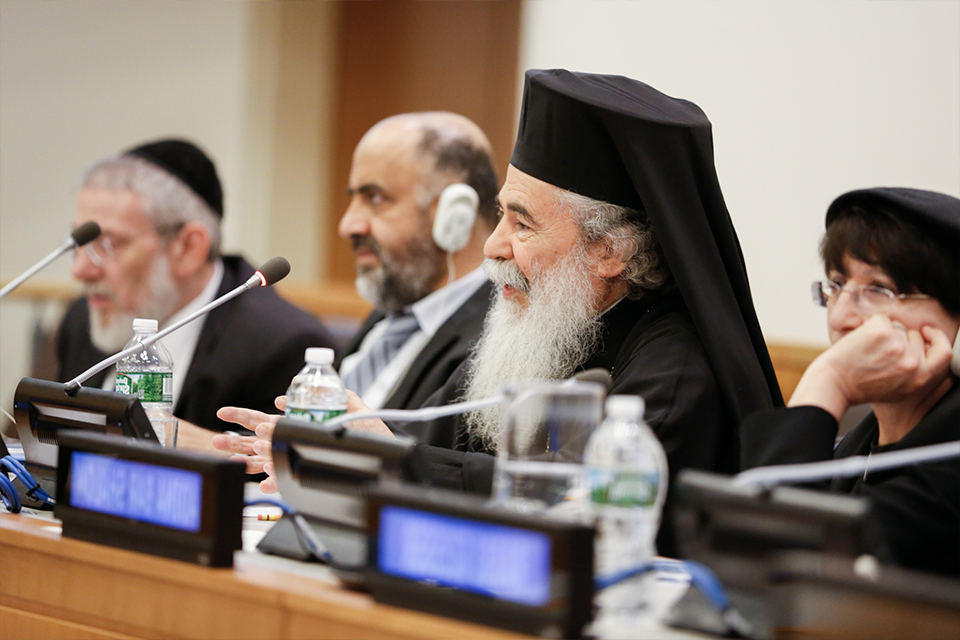 In resolution 69/312, the General Assembly recognized the critical role of UNAOC in promoting inter-religious and intercultural dialogue within the United Nations system. UNAOC works actively with religious leaders and faith-based organizations in three key areas: advocacy, capacity building, and knowledge management. Since 2013, UNAOC has organized or co-organized numerous events involving religious leaders and faith-based organizations, creating a global platform to discuss the best ways to advance the use of interreligious dialogue. UNAOC is also an active member and participant in inter-agency bodies, most notably, the Inter-Agency Task Force on Religion and Development (UNWPF). 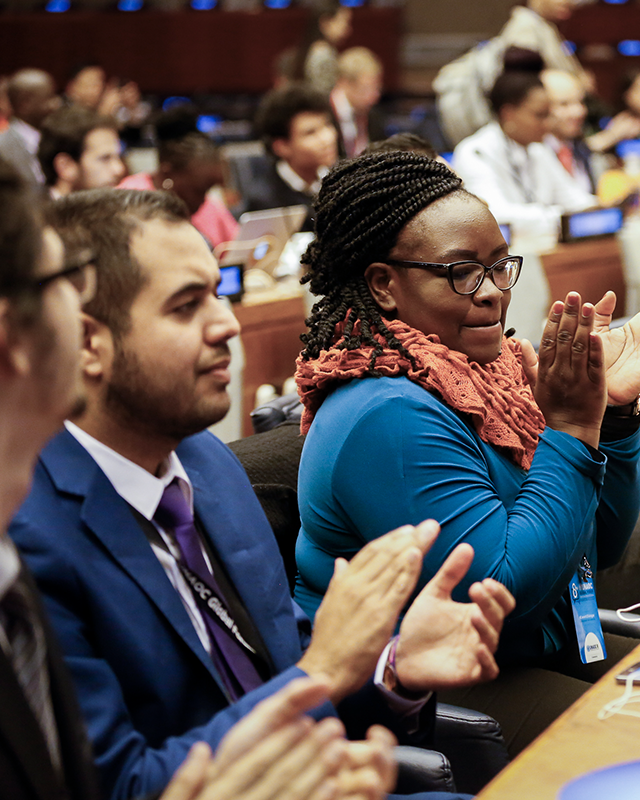 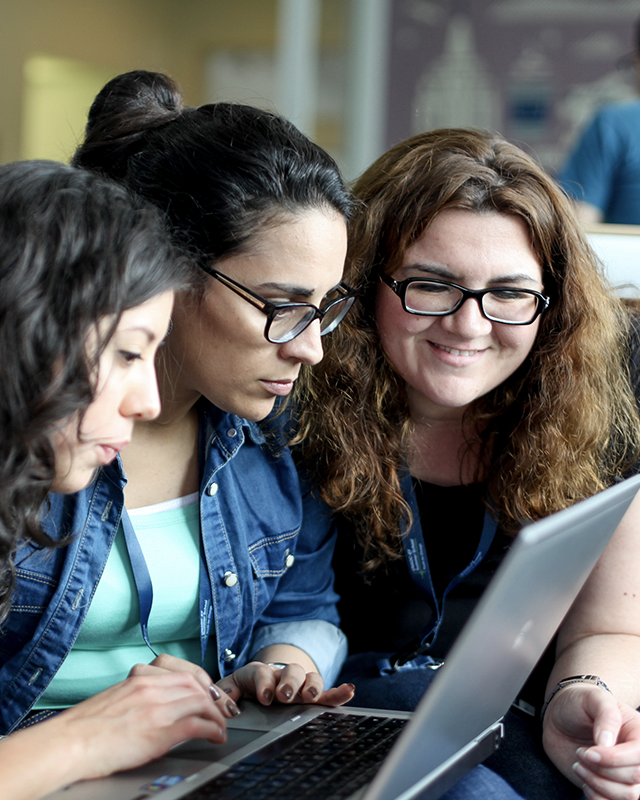 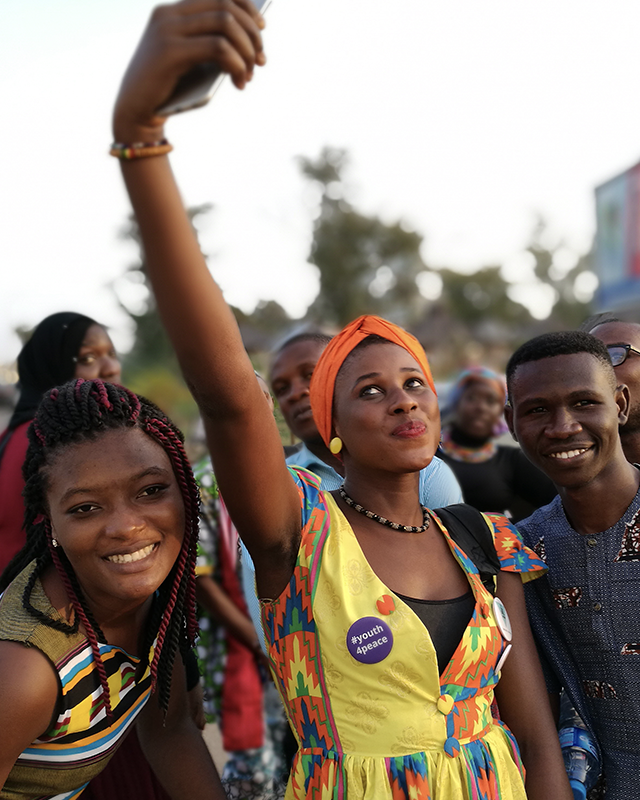 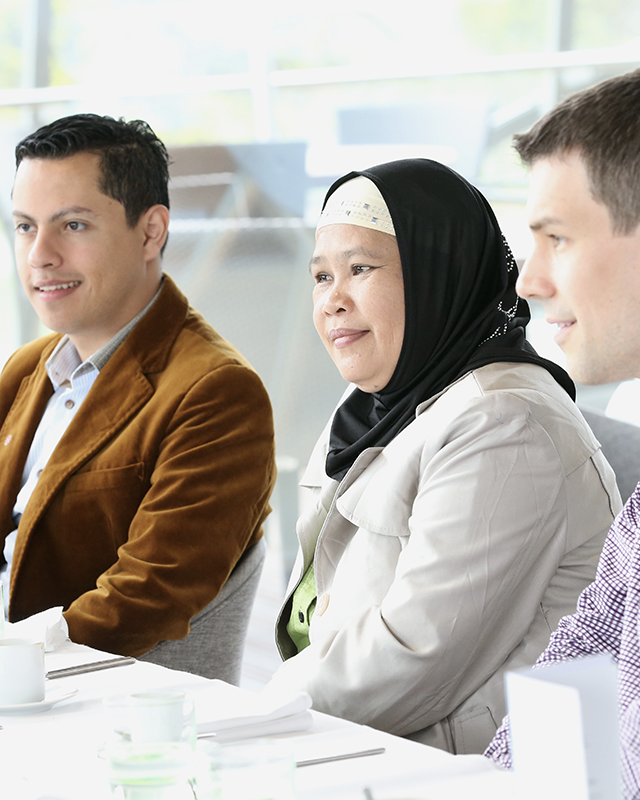 HIGH REPRESENTATIVE FOR THE UNITED NATIONS ALLIANCE OF CIVILIZATIONS

As I embark on this mission of leading an organization the inception of which I witnessed more than fifteen years ago, and as I saw it grow to maturity, I cannot help but contemplate what we have achieved so far, what the challenges are and what the way forward is. Today, it feels like déjà-vu. The context and raison d’être that set the stage for the creation of the Alliance of Civilizations in 2005 is more or less still the same. Our world today is facing complex challenges that have snowballed over the years and reached epic proportions. Societies are divided across ethnic and religious lines. Racism, xenophobia, anti-Semitism, and Islamophobia are on the rise and often leading to a vicious circle of violence and terrorist attacks.

In 2005, the Alliance of Civilizations was officially created as a political initiative of the Secretary-General under the co-sponsorship of the Governments of Spain and Turkey.

Despite all efforts, inciters of hate take pride in driving a wedge between different ethnic groups and civilizations. For them, diversity is a source of division, instead of a basis for dialogue and richness.

I would like to quote here Albert Camus, one of my favorite authors of all time who said: “Without culture, and the relative freedom it implies, society, even when perfect, is but a jungle.”

These challenges require our collective resolve. The battle for ideas, for our shared values, never ends.

The truth is – today more than ever – diversity is the reality that informs human life. Diversity means embracing pluralism in nations and cities, tribes and villages, in ethnicities and identities, in beliefs, faiths, and traditions.

I came from the Iberian Peninsula, a region that flourished through the interaction of Muslim, Christian and Jewish traditions. Our religions are tied to one another in a fundamental and indelible fashion. Our cultures are intertwined together in a spectacular mosaic forming the universe that we all share. We are all global citizens of the world.

As such, the United Nations Alliance of Civilizations was created to embrace and promote those core values of compassion, tolerance, and respect of the other. The motto it carries is “Many Cultures, One Humanity.”

To live up to that motto, my renewed vision for the Alliance rests in this proposed Decalogue: